how to script with Objective-C

Is it me, or is AppleScript experiencing something of an Indian Summer? It seems everywhere I go, people are talking more about macOS automation, AppleScript and even Apple’s curious hybrid syntax AppleScriptObjC (ASObjC).

Of course, some people have suffered miserably at the hands of AppleScript in the past, and even though the thought of scripting with access to Cocoa APIs through Objective-C is tempting, they fear the AppleScript side of it.

If that’s you, bear in mind that AppleScriptObjC isn’t really “AppleScript + Objective-C” at all. It is actually just a dialect of Objective-C that will be accepted in the (Apple)Script Editor and can be run by an instance of the AppleScript component. In plainer English, you can use Objective-C in an AppleScript without any AppleScript whatsoever!

The point of doing so would be that one could package Objective-C code in a .scpt file (or scptd bundle or AppleScript .app), and also mix whatever scripting language you prefer with calls to Cocoa’s APIs.*

The problem that using ASObjC presents anyone familiar with Objective-C is how to translate ‘pure’ Objective-C into the dialect that Script Editor (and other applescript runners like FastScripts, Keyboard Maestro, Automator, etc) can understand. If you use LateNight Software’s Script Debugger for scripting, you’ll already know that the work is done for you by the app’s built-in code completion. If you’re battling on in Apple’s default Script Editor, you’ll need to do the translation manually.

By way of example, then, here’s some original Objective-C, and below it, a translation that would work in Script Editor:

The main peculiarity is the use of possessive word forms and that variable attribution is done by using "set X to Y" rather than "X = Y". Type declaration is done via the idiom 'set <var> to <NSObject>'s <class init method>', which returns an instance of the object just as it would normally. You call instance methods by putting the instance in front of the method just as you would in regular Objective-C (e.g, see line 3 of the examples).

As you can see in the screenshot below showing Xcode and Script Editor, they work in the same way. You’ll notice in Script Editor there is a 'use' statement (equivalent to Objective-C’s ‘import’), and there’s also a whole load of property statements. These latter are peculiar to the ASObjC translation, and don’t have a counterpart in pure Objective-C. All you need to know about these is for each kind of Objective-C object you want to use (NSString, NSArray, whatever*), you’ll want a property statement for it at the beginning of the script. The statement always has the same form:

I think the best way to think of ASObjC was recently summed up by Sal Saghoian, when he said that ASObjC is “…the ultimate duct tape. You can do anything you want with ASObjC. You own the computer.”

*not all Cocoa frameworks nor all Objective-C objects can be bridged to, but pretty much all the most useful ones are available. 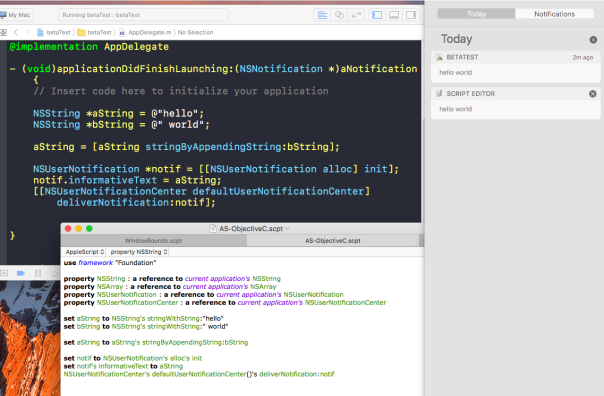 Comments Off on how to script with Objective-C

I recently discovered a neat little extra automation tool on top of the familiar ones of AppleScript, Automator, and script runners like FastScripts and Keyboard Maestro. Meet Hammerspoon, which differs significantly in not using Apple Events to do many of its automation tasks. Instead, Hammerspoon bridges directly to Apple APIs using the lua scripting language, and that allows you to do some interesting things.

Here’s a good example. One of the ‘danger zones’ on your mac – by which I mean one of the favourite places for adware, malware and other assorted badwares to infect – is your LaunchAgents folders. Apps like my DetectX and FastTasks 2 keep an eye on these areas by design, warning you in the Changes and History logs when files have been added or removed from them – but Hammerspoon can add an extra little ‘canary’ warning for you too. With only a few lines of code in Hammerspoon’s config file, you can set up an alert that will fire whenever the LaunchAgents folder is modified.

It has been possible to rig up something similar for a long time with Apple’s built-in Folder Actions, but there’s a couple of reasons why I prefer Hammerspoon for this task. One, despite Apple’s attempt to improve Folder Actions’ reliability, I’m still not convinced. I get inconsistent reports when asking System Events to check whether Folder Actions is enabled even on 10.11 and 10.12. Second, Folder Actions is limited in what it will respond to. By default, only if an item is added. With a bit of effort, you can rig it up to watch for items deleted, too, but that’s pretty much it. With Hammerspoon, it’ll alert you whenever the folder or its contents are modified in any way whatsoever. The final reason for preferring Hammerspoon for this particular task is ease of use. It really is as simple as pasting this code into the config file:

And what’s the config file you ask? Nothing complicated! Just launch Hammerspoon, click its icon and choose ‘open config’. 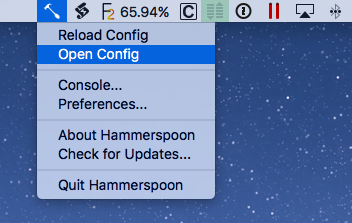 That will launch your default text editor, and all you do is paste your code into there, save it (no need to tell it where, Hammerspoon already knows) and then go back to the Hammerspoon icon and click ‘Reload config’. That’s it. Less than a minute’s work!

There’s a lot, lot more you can do with Hammerspoon, so if you’re interested head off and check out the Getting Started guide. One of the nice things is that you can even call AppleScripts with it, so you really do have a world of automation options to choose from!

Comments Off on get automated with Hammerspoon

how to make Spotlight fast again

I’ve been wondering ever since Yosemite what Apple had done to mess up Spotlight. It used to be my go-to way to launch apps. Faster than LaunchPad, the Dock or, of course, trawling through the Finder.

But something happened after Mavericks, and things have only being getting worse with Spotlight, right up to and including into Sierra.

Not only has Spotlight been slowed down with ads and ‘suggestions’, but we’ve also even lost the choice of re-ordering search results priority in Spotlight preferences.

I find Spotlight is not only slower than before, but it doesn’t always return the hit I want even when I know what I’m looking for. For a while, I got into the habit of searching using mdfind and locate in the Terminal. Like Spotlight, these use an index based search so can return results very fast. Eventually, I got fed up of that, and wrote my own search tool and added it to FastTasks 2

All this is not good, and if you are seeing the same degradation in Spotlight’s usefulness as I have been, try unchecking the following Preferences and see if it works to get Spotlight back up to a useful speed. With these disabled, I’ve seen a remarkable improvement in Spotlight in macOS 10.11.6.

Comments Off on how to make Spotlight fast again

how to tell if iCloud Drive is up-to-date

I tend to work on the iMac at home, then take an MBP to work. Several times I’ve thought iCloud had uploaded what I had been working on at home before I left, only to find that when I got to work, the old version was still the latest one on iCloud. Of course, I checked for the spinning little progress indicator, but apparently I either missed it or it didn’t appear.

To mitigate this problem, I came up with this script to tell me what iCloud daemon is doing. If files are pending update or being updated, it will indicate which ones. It will also tell me if the iCloud daemon is either idle or busy / not responding.

Get the iCloud Daemon Script from my pastebin